How 3D Printing is helping to keep you safe

Emergency Services are the backbone of any civilised culture. Think about it. These sectors help to maintain the wellbeing of the populace, to enforce the code of laws so that anarchy does not ensue, helps with search and rescue, reduces the risk of loss to property (whether that is by fire or other natural disasters), and help to restore communities when there are emergency situations. It is therefore reasonable, and essential, that Emergency Services are optimised for both functionality within communities, as well as efficiency in doing the jobs well. One way in that this can be accomplished is by using 3D Printing.

Perhaps the greatest advantage within the emergency sector is 3D Printed medical equipment. The equipment needed to run emergency clinics, shelters, and mobile stations is generally low budgeted. Consequently, more likely than not, the equipment options for doctors and other emergency personnel is sub-standard (or neglected) in order to provide the maximum quantity. Hence, quality falls. Yet, with 3D Printed medical equipment, especially where it pertains to mobile units, the Doctor, Nurse, or Medical Practitioner is allotted the option of equipment at a fraction of the cost. A medical device which may have cost thousands of dollars to print in metal may only cost a few hundred pounds worth of 3D filament to fabricate. 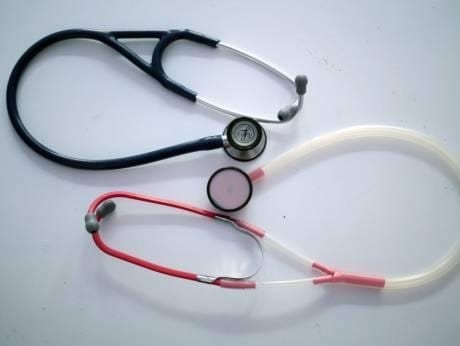 Medical equipment, such as the stethoscope shown in the lower portion of this picture, provide a low cost alternative and is quickly available for Nurses and Doctors.

One factor which continuously plays upon rescue units is replacement and fixes to parts. While there may be a budget for such replacements and fixes, time and shipping of such pieces are always against the team. This poses a critical risk for the emergency sector. However, because 3D Printers have advanced to the point of being available for desktop size, various emergency service sectors can potentially print replacement parts on the spot, thus greatly eliminating any down time that (for example) an ambulance, fire truck, police vehicle or supporting equipment may have if using the traditional ordering and shipping method of fixing and replacing.

In an episode of Shark Tank, a fireman presented an idea for a quick connect and release flange. In the episode, the fireman claimed that the connection could save 8 seconds. And while some would state that 8 seconds is not that big of a deal, for a fireman 8 seconds could mean the difference in a rescue or a retrieval. Again, in this episode, it was not mentioned whether or not 3D Printing could be used for the manufacturing process (it was still in the development stages). Yet, the thought that using 3D Printing for such innovations within the Emergency Services sector, combined with the innovation such as that presented in this episode, does showcase the potential for optimising the various tools used within various emergency sectors, such as firefighting, in order to lower cost of production of innovative ideas, and thereby increasing the probability for mass production and acceptance into the various areas where the part could be used the most.

Though the Sharks only wanted to talk about a smaller quick connect which would be used for home hose connections, the thought that a product such as this could be prototyped with 3D Printing, manufactured, and then put into use in the Emergency sectors, is encouraging, especially if the innovation can save time and lives.

Think about equipment within the emergency sectors. The equipment, as a general rule, is not made for the individual, but for the profession. For example, a fireman’s hat may be made for a certain sized head, but it is not made for Fred Fergeson of station 311 (just to make up a name and station). Using 3D Printing can ensure that the helmet fits the person’s head exactly and that the visor and any other supporting parts of the design are specifically catered to the person using the equipment. The result is that the equipment, whether or the Fire, Rescue, Police, Medical, or Volunteer Emergency Sectors, is better used and has a greater longevity, primarily because the equipment is less prone to unnecessary wear & tear and breakage caused by a professional “making due” with what is provided.

From shields to shoes, toothbrushes to two-way walkie talkies, 3D Printing can, and has, helped the Emergency Services sector. The question is, where will it take us next?