Yes, There is Such a Thing

Bulletproof 3D Printing is actually a thing. When the average person thinks of bulletproof needs, they immediately think of police officers and Kevlar vests to keep them safe. These pieces are highly resistant toward most bullets and have been a staple for law enforcement since 1976 when the first Kevlar vest was invented by Richard Davis. Thanks to Davis, many lives have been saved through the use of Kevlar and the technology has also been adapted to bulletproof cars and glass.

However, the possibilities have been drastically limited to high end pieces and traditional manufacturing which makes it remarkably expensive to have anything certified bulletproof. 3D Printing has been used for many years to bring down the costs involved in manufacturing and the notion has now infused itself into the bulletproof industry as well.

When thinking of materials for 3D Printing, PLA plastics, nylon, and metal materials come to mind. These materials are inexpensive to use and have various levels of strength and durability associated with them. Surprisingly, studies have shown that depending on the level of thickness, standard plastics and 3D Printer materials can stop a bullet. PLA, PETG, and ABS have been tested at 20mm thickness to successfully stop a bullet, but they do tend to shatter or split on impact. However, materials such as Markforged Glass ONYX and Markforged Glass Fiber CFF have proven to stop a bullet at half the thickness of average materials, just 10mm. 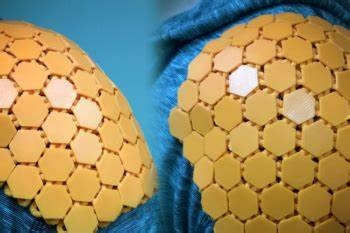 An Example of Bulletproof 3D Printing for body armor.

What Are the Implications?

On the surface, 3D Printed body armor and the ability to arm cars and practically anything with a bulletproof exterior is an excellent idea, but in order to understand the concept a little deeper, we must look at the history of body armor and how it has changed throughout the years.

Body armor has drastically evolved over the years and even though the first thought that often comes to mind when the word armor is mentioned is a medieval night, covering the body for protection goes far beyond simply medieval times. The first notion of body armor was originally derived in the earliest centuries from animal skins. Skin of various animals were dried and fitted to the specific person’s body for protection against attacking animals or during war times, but the main flaw has always been the lack of a truly strong exterior shell. Where animal skins might stop or at least slow down a spear, it is still no match for the modern bullet.

During medieval times, we get the first glimpse of the use of metals as a means to protect the warrior. Armor was still fitted to the individual fighter and was generally reserved for those of higher societal ranking as it was enormously expensive. The main flaw in medieval armor was not that it would not stop a spear or protect the wearer, but that it was immensely difficult to move in and next to impossible to sneak up on your opponent during a battle. 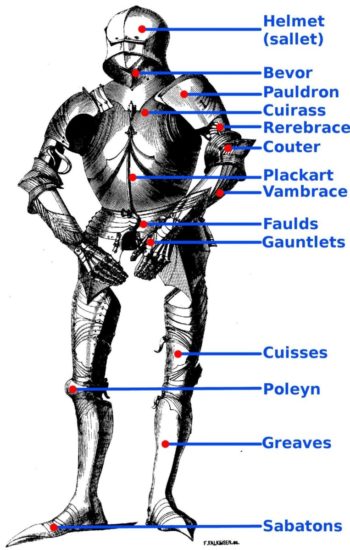 Components of Medieval Armor. This style of armor would have to be cumbersome to move and fight in.

How 3D Printing Fixes All Issues

3D Printing has done a lot for us and, thankfully, it solves virtually all problems associated with armor. Modern 3D Printed armor is made from high strength, durable, and flexible materials and can be fitted directly to a person’s form. This gives ultimate versatility to its use in the production of armor for military use, law enforcement, and even high-profile citizens guarded by security teams. What is most impressive about the implications of 3D Printed armor is the fact that it can be made into practically any shape and style.

3D Printed body armor maintains a lightweight form that, as the technology progresses, will become thinner and more durable. Essentially, although currently not on the market, the technology has the potential to impact more than just law enforcement and military units Those that are in the public eye must remain vigilant against possible angry fans, but they also have to look their best. Imaging Hollywood’s elite hitting the red carpet in stunning 3D Printed gowns and suits that just happened to be fitted with the latest and thinnest version of 3D Printed bulletproof materials. 3D Printing body armor would solve an enormous amount of protection issues and is far more inexpensive than traditional mass-produced Kevlar body armor.