It was stated once that “part of the beauty of our relationship with jewellery is that it can change and evolve as we do ourselves” (Erika Christensen). This is definitively true when considering the evolution of jewellery since the Desktop 3D Printer was introduced. And as the cost of such machines has continuously declined, making it easier for aspiring designers to not only conceptualize jewellery, but also 3D Print those conceptions into reality, the market has expanded. Those considering embarking in customized jewellery design may wish to consider the advantages of Jewellery 3D Printing.

Unless a person is producing jewellery on a mass-production scale, the cost of using a 3D Printer for his or her jewellery is substantially less than outsourcing the product to a manufacturer. For one, when using a manufacturing establishment, a set number of products must be established. As the manufacturer has to cover their overhead, their material, as well as shipping cost, this cost is transferred to you, the designer, in the making of your jewellery.

For sole proprietary businesses or those businesses which have a local/on demand market, using 3D CAD Design for their conceptualizations greatly reduces the cost of production. A small Desktop 3D Printer can be acquired for as low as $150 in some cases. Granted, these lower cost models will be limited in their printing area and in the materials which can be used, but they can create prints. Add the material cost to this, which is usually about $40 for base 3D Printing Filament, and you have around $200 of out of pocket expense.

Because the Desktop 3D Printer is so readily available and affordable, there is no need for the aspiring jewellery artist to spend years mastering metal working and fashion design. While it is encouraged that such avenues are explored, it is no longer mandatory to create stunning jewellery. So easy has the methodology of creating 3D jewellery become that people as young as middle school have taken their sketches, imported them into a CAD design, and printed their own jewellery expressions. From rings to necklaces to ear rings and armbands, the market is expanding.

Even those who have no skill in Jewellery design, sketching, or such have the ability to create jewellery. Because of the low cost of 3D print models, many are seeking this alternative over going to a jewellery store. For example, a 3D model of a ring may cost $10 to $50 depending on the design. Even with the cost of printing, it is a fraction of the hundreds, if not thousands, that could be spent on a white or yellow gold ring. Granted, these prints do not have gems, but that has not deterred the models from popularity, demand, or from being printed.

Generally, there are two main methods for using 3D Printing Jewellery. The first method is to have a Metal 3D Printer (unless of course you are printing plastics and painting the jewellery). For this method, one would only need to ensure that the 3D model is created with the proper .stl format or CAD Design for the printer, and that it is to scale. The second method for creating jewellery is to use the 3D Printer to make a cast of the jewellery which is to be created. The designer then would let the model cool and create a cast. From here any number of materials could be poured into the cast, using traditional methods to create the jewellery.

For designers who choose to use the first method, concepts to print can be created rather quickly. The designer needs only to import the file into illustrator, export it with under 255 character lines (illustrator 3 format works best), bring it into 3Ds Max or a similar 3D program which can turn the work into spines, extrude, and save the .stl file for printing.

This simple Butterfly pendent was created using illustrator and 3DS max and is 3D Print ready. Image supplied by Siclari-Studio

How 3D printing is Changing the Jewellery world

Jewellery is as much about expression as it is about luxury. Designers are exploring the various ways of merging the creative with the luxurious to re-define what constitutes jewellery. With the use of metal 3D Printers designers have introduced some rather complex designs that would be costly if not impossible to create otherwise. Designers such as Christoph Laimer Tourbillon have created functional jewellery using 3D Printing, in this case a watch mechanism, others have used 3D Jewellery as a means of artistic expression. Obviously, the trend to 3D Printing is catching on. 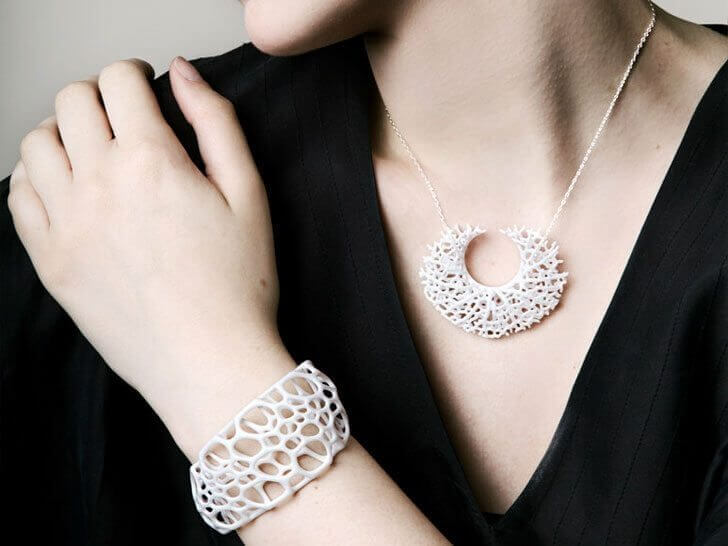 For the Jewellery world, this could impact the higher luxury options which are available. As the market is expanding on materials which do not necessarily require cut stone (though there will continue to be a demand for diamonds and such fine gems), those which provide such jewellery will need to become more competitive in their prices or integrate Metal 3D Printing techniques to offer unique settings for their stones as well as cater to the demands of the market.