Taking 3D Printing to the skies

Aerospace typically conjures up images of astronauts and space shuttles. Right now, some of you probably have the Star Trek, Star Wars, or Lost in Space soundtrack playing through your mind. The fact is that Aerospace has always been a realm of imagination and exploration. As a culture, we have pushed the limits of technology to go beyond what is common and what is realistic, striving to obtain (and pardon the play on words) new heights.

3D Technology has played an important part in modern aerospace developments, specifically in 3D Printing. According to one site, NASA is using 3D Printing to make chamber liners for their next mission to Mars. But this is not the only thing which NASA is involved in. Rockets and Radiation Shields have been 3D Printed for NASA. This type of printing was used by invoking FDM Technology.

To understand the FDM method, look at the picture above.

You may wonder why NASA would be using 3D Printing on items which are going into space. Firstly, there is the weight consideration. Usually the materials which are used in the fabrication of prototypes and parts for Aerospace 3D Printing are substantially lighter than metal alternatives. As weight is a major factor of space craft, using a Commercial or Desktop 3D Printer to make lightweights parts is ideal. Secondly, when considering that some of the devices which are to be used by the Aerospace Department will be used on other planets (such as Mars), it is beneficial to have a material which is non-corrosive. Metals are prone to become damaged rather quickly. And while there may be a bit of a concern with the longevity of plastics and polymers used in the 3D Printing process, it is safe to say that they are far more durable than thinner metals constantly exposed to sand and other environmental hazards.

Aerospace technology must account for a tremendous cut in their budget. According to the 2020 projected budget plan, as reported by the Planetary Society, NASA will receive a $481 Million dollar cut. The equivalent is less than one may think, accounting only for a 2.2% decline off of the $21.019 billion dollar fiscal cap. In 2014, the budget of NASA was reduced under the Obama administration. So both the red and the blue have cut funding. And, while the budget cuts from both parties have been to increase the fisical budgets for other sectors, it has had a negative impact upon Aerospace development. 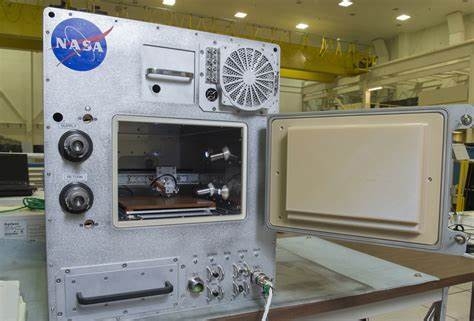 The cost to run this NASA 3D Printer
is a great deal less than having to outsource (or even inhouse) manufacture metal and other materials for parts. Additionally, the weight of the 3D Prints from this machine is ideal for space use.

Regardless of the dollar amount, a cut in any budget means that somewhere belt tightening and cost allocation must be conducted. NASA’s use of a 3D Printer helps to minimise the cost of making parts, many of which have never been produced as they are conceptual prototypes or parts for exploratory space craft.

Boldly Going in the Imagination

Perhaps one of the biggest advantages of Aerospace 3D Printing is the ability to reach further into the unknown. This is not just the ability to put a droid on Mars, shoot a satellite into dimension X, or even to make the shuttle a bit lighter, but rather, being able to prototype out new ideas and to then take those ideals and make them a reality using 3D Printing is outstanding. Furthermore, NASA can then take technology which is both functional and cost effective and apply that technology to Aerospace Technology for such sectors as the Military, domestic air travel, and household products.

What we do not want is to stifle the creativity and the ability for NASA to continue to push the limits. I believe that NASA, and Aerospace technology, is one of the last of the creative and explorative fields. Upcoming students, both those at high school and college levels, as well as those in elementary, need to have a career option that they can see as being mystifying. In a world where everything seems to be so defined and contained, we need to encourage the use of 3D Printing and prototyping. We need to think outside of the proverbial box, making the imagination and what we can achieve as vast as the boundaries of the Universe.